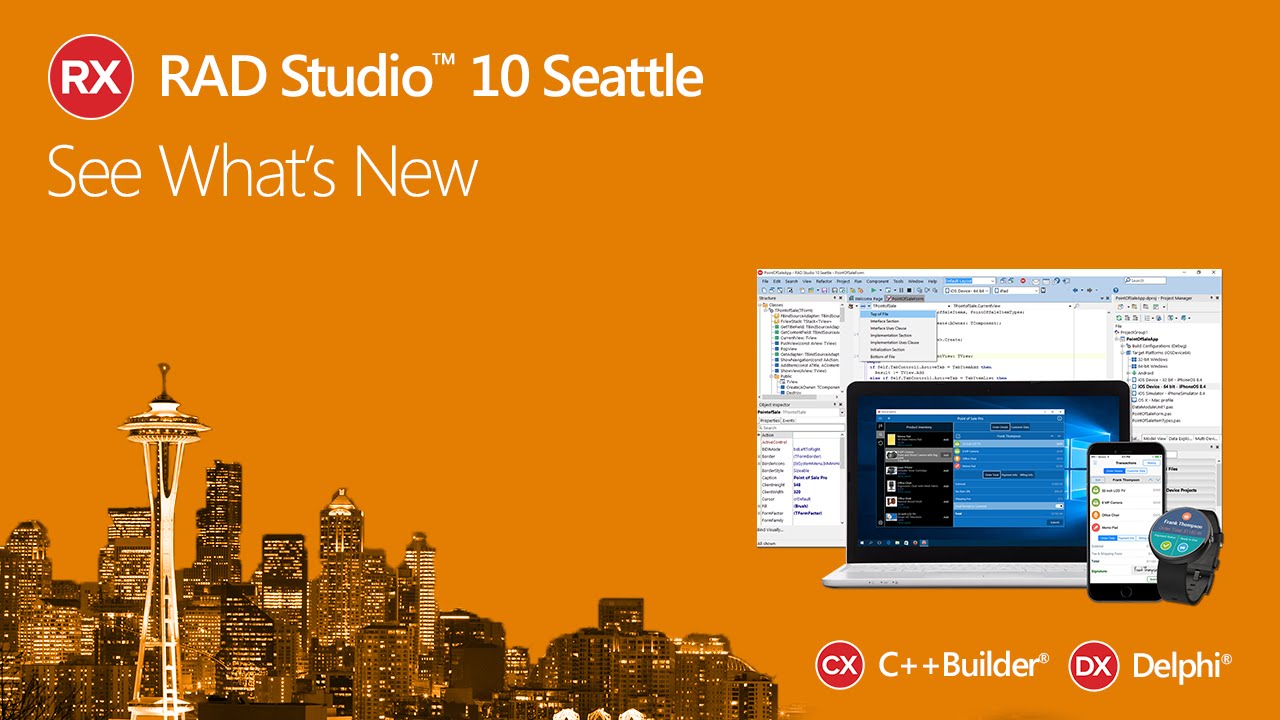 We are delighted by the prospect of working with Delphi now that the IDE uses large memory addresses. Our 2.6 million lines of code should breathe a little easier 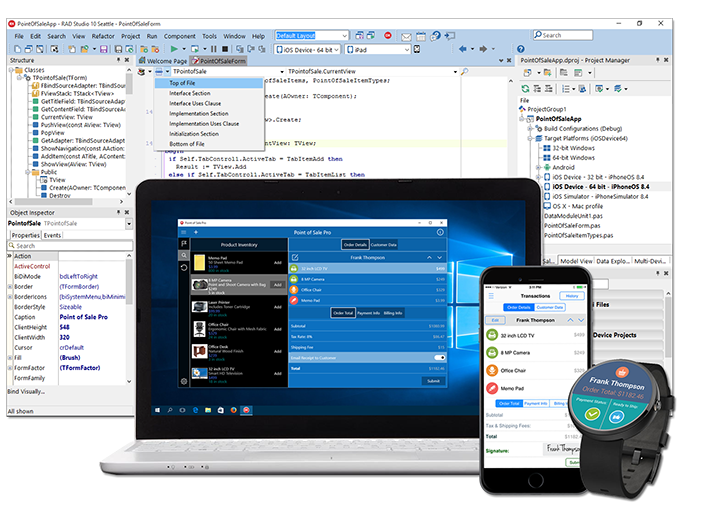 With Delphi 10 Seattle, my apps will be ready for the millions users moving to Windows 10!

New! Ride the Windows 10 Wave - Take Your Applications and Customers to Windows 10

Windows 10 is the most significant PC release in many years and it is a big opportunity for software developers.

Windows 10 is experiencing rapid adoption and is expected to be on 1 Billion devices within the next few years. Now is the time to move apps and users onto Windows 10. With Delphi 10 Seattle, bring those new Windows 10 platform features into your apps quickly and easily. New VCL User Interface Controls, WinRT and Universal Windows Platform (UWP) Components and APIs, give developers easy access to new Windows 10 services including Notifications, Contracts, and much more!

The Windows 10: The Big New Opportunity for Developers whitepaper is an in depth evaluation of why Delphi developers are ideally placed to take advantage of Windows 10 and why now is the time to prepare for new ways of developing and deploying Windows 10 applications. 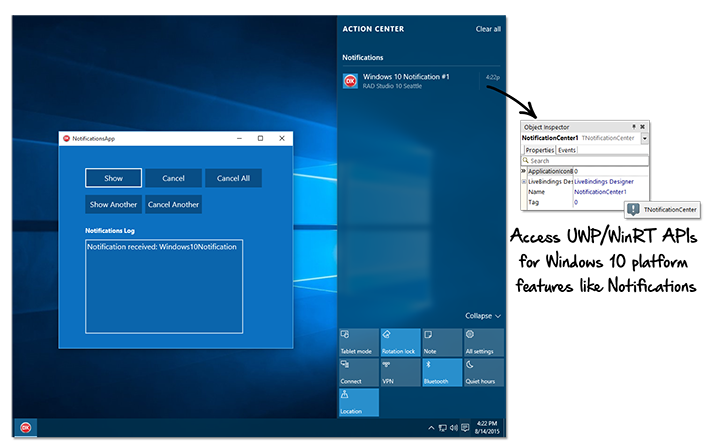 The developer experience of Delphi just keeps getting better and better. Every day I am glad I chose Delphi 10 Seattle as my primary development platform.

The quality and stability of IDE developer productivity features is greatly improved. 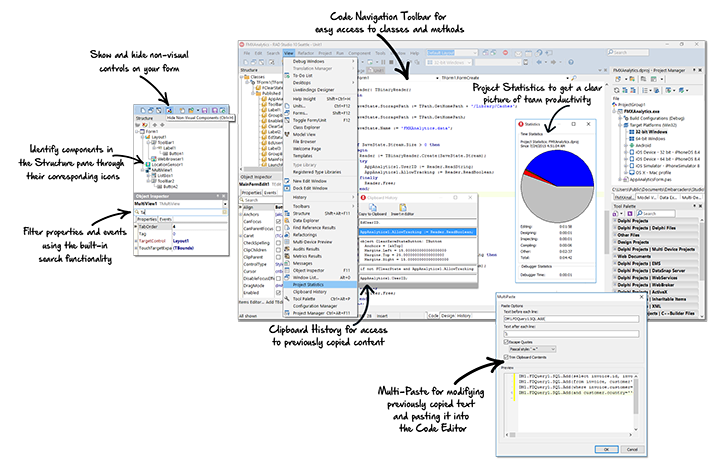 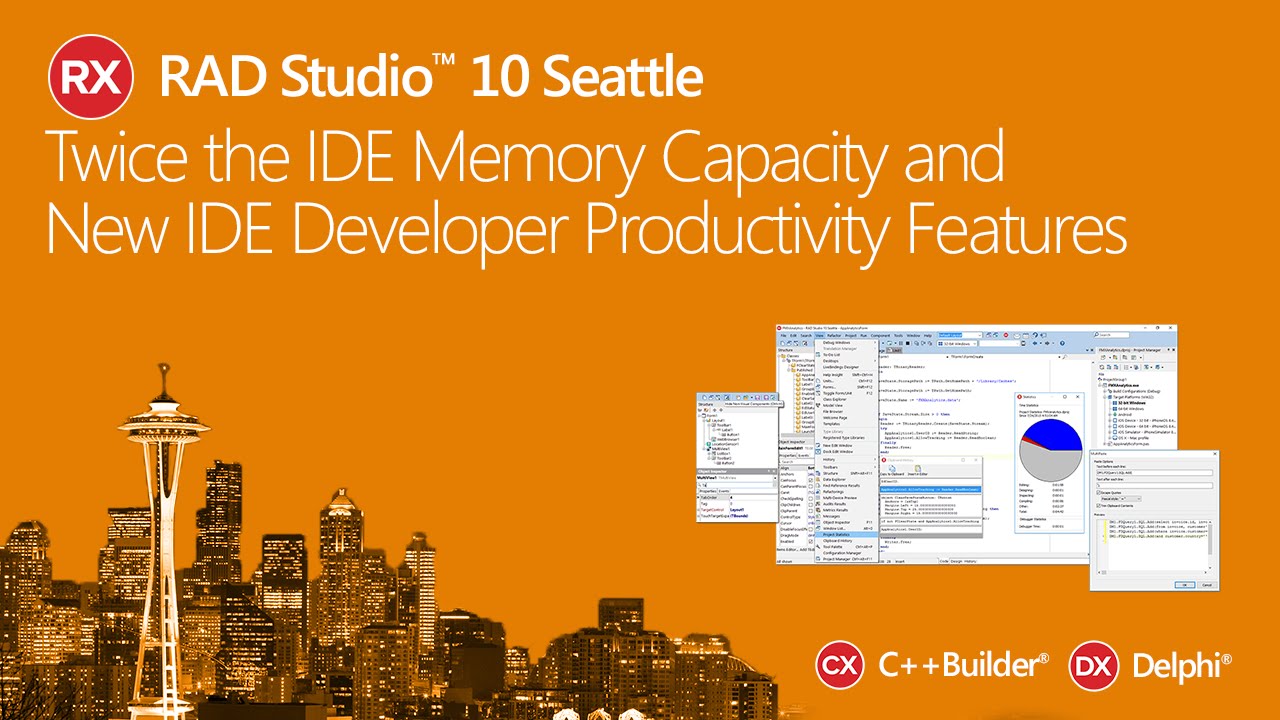 With Delphi 10 Seattle, you can build world class cross platform applications for the latest developments in the mobile sector.

New! Design and Build for Desktop and Mobile Platforms At Once – Now With Platform Native UI Controls

Code once and deploy to Windows 10, Android, iOS and OSX with FireUI

Delphi 10 Seattle features the FireUI Multi-Device Designer and cross-platform UI framework that delivers the only true single source solution for natively compiled applications. Most other vendors who support native cross-platform development require separate user interfaces to be written on each platform.

Mobile developers can finally build a common, native look and feel UI that works across multiple form factors of mobile phones, tablets, and desktop systems – all at once! From the user interface code through the rest of the complete client software stack, your apps can access platform APIs, device sensors and services, and deliver the best app performance with native GPU and CPU support all from a common and shared code base.

FireMonkey’s underlying visual control architecture has been significantly overhauled to enable multiple presentation implementations per control called “ControlTypes” - in particular, native OS control presentations (renderings) can be utilized. The new underlying architecture is MVC based and is backward compatible enabling developers to choose at design time between Styled and Platform control types on a per control basis on supported controls. This allows you to select whether a control will be implemented at runtime by FireMonkey’s GPU driven rendering like or rendered by the underlying operating system. In either case, use the same control API.

Because controls with a Platform .controltype use the same underlying implementation as native SDKs like Cocoa, your FireMonkey apps will have the smooth native scrolling and performance that end-users expect yet use the same component properties, methods and events and are still cross-platform between OSes. This enables you to maintain complete cross platform fidelity across Windows, Mac, iOS, and Android and deliver the best user experience possible. 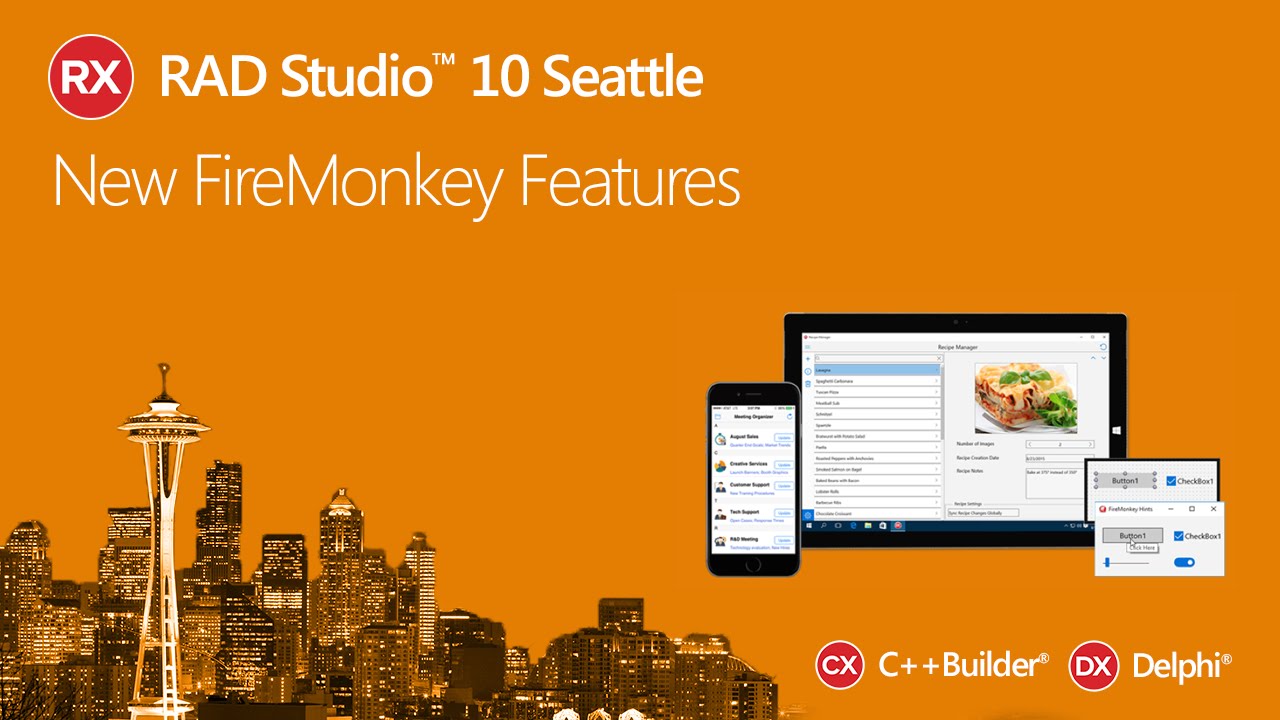 A New Benchmark of Quality, Performance, Stability, and Documentation

The Embarcadero process of development, testing, and documentation delivers the best QPS.

Major engineering initiatives and improvements have been made to Embarcadero’s development, testing, and documentation processes in 2014 and 2015 with the goal to provide an improved developer experience across the many platforms and languages that Delphi now supports. For example, improved documentation processes introduce new features and functionality across all supported platforms and languages with radically higher documentation quality and coverage. New R&D testing procedures locate bugs far earlier in the development process and with a near 100% coverage rate resulting in fewer bugs introduced, higher fix rates, and higher overall quality and performance. Delphi 10 Seattle is the new benchmark for quality, documentation, and stability.

Delphi 10 Seattle has the biggest potential since Delphi 7. With expanded memory for the IDE and support for Windows 10, it's time for you to get to know Delphi!.

Easily connect Internet of Things gadgets and devices to your app or Enterprise. 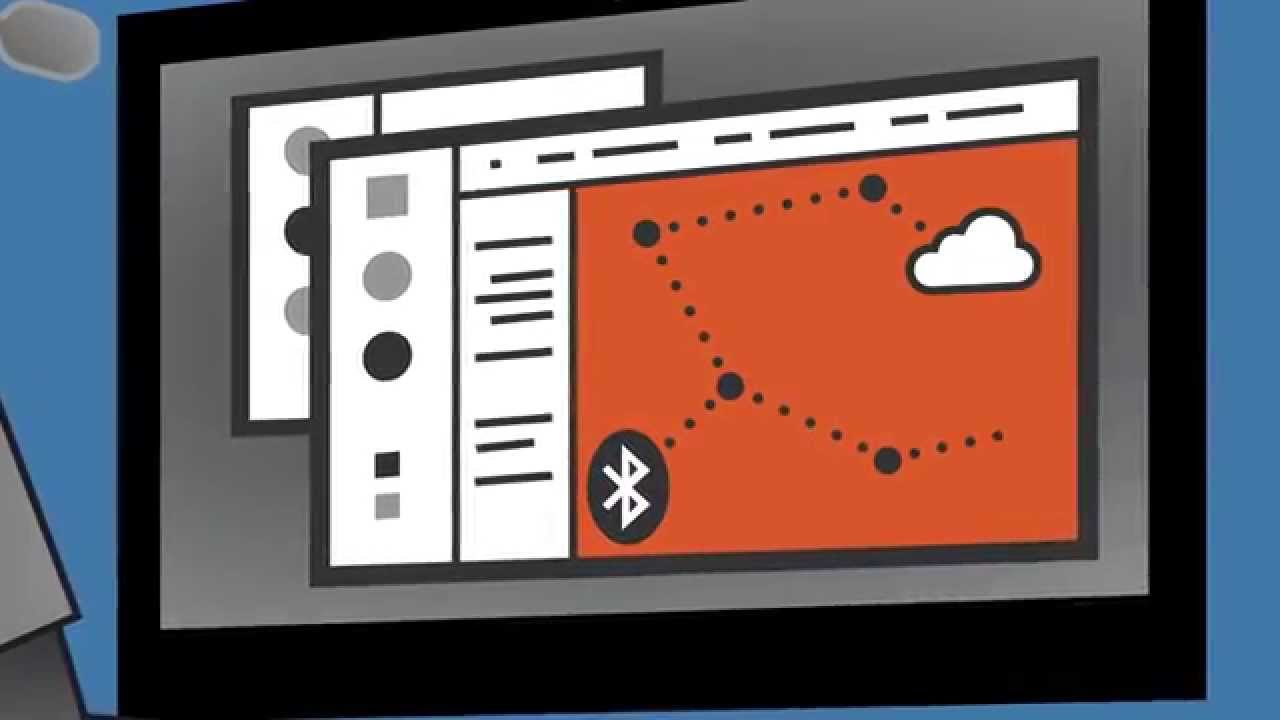 Functionality of existing business apps can be easily extended to integrate mobile devices and new IoT gadgets that deliver novel solutions. Useful IoT and business apps are no longer stand-alone (tethered to a single mobile app) but are distributed over several tiers, gadgets and devices such as operating system platforms including Windows, Mac, iOS, Android, as well as middle-ware, cloud, servers, and enterprise services. Extending existing apps is a big win for business app developers because they can incorporate IoT solutions while maintaining existing infrastructure and leveraging existing and large codebases. Virtually all industries can immediately benefit from building connected apps, such as retail, food services, health care, manufacturing and industrial automation; the applications are limitless!. 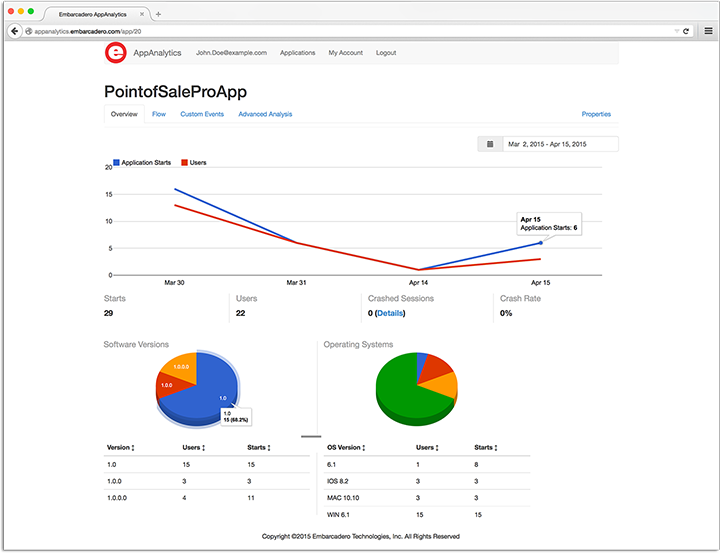 Enterprise Mobility Services (EMS) is a new turnkey solution for today's interconnected, distributed apps, offering an easy to deploy middleware server that hosts loadable custom API and data access modules. EMS is based on open and standard technologies, including REST HTTP calls and JSON data formats, and provides major SQL database drivers along with a built-in encrypted SQL data store. With its user management and authentication plus user and API analytics, Enterprise Mobility Services is ideal for enabling secure access from mobile and desktop apps to Enterprise Databases. EMS is a middleware solution that is stateless, restful, scalable, and secure. Open the world of connected devices to your existing Windows VCL app with EMS!

EMS has been improved with updated and new features. Push Notifications server support for iOS and Android allows developers to deliver event driven notifications to the end user’s device through EMS.

New! Understand Your Users and How They Use Your Apps With AppAnalytics

Embarcadero® AppAnalytics is the first analytics service for mobile, desktop, and wearables.

Understand your end users, wherever they are, to deliver better apps and experiences. Track and measure how often apps are used, which platforms they are running, what features customers are using, find and log crashes and more. Understand user behavior by capturing anonymous usage stats from end users. . Understand users today in existing Windows VCL apps, FireMonkey mobile and desktop apps to deliver better solutions. AppAnalytics is an analytics and tracking service, hosted by Embarcadero Technologies.

With an expanded GetIt library and fast speeds for large projects, Delphi 10 is serious business... Embarcadero has hit a home run!.

BeaconFence
BeaconFence is a developer proximity solution that delivers precise “GPS-Free” indoor/outdoor user location tracking and events with radial and geometric zones for any physical location and layout. Visually draw the layout of the physical location and beacon placement to track location information down to inches. Create radial and rectangular zones and track intersections, enters, and exits with callback events. BeaconFence enables developers to take proximity beacons to the next level by adding precision spatial location awareness to their applications both indoors and outdoors. 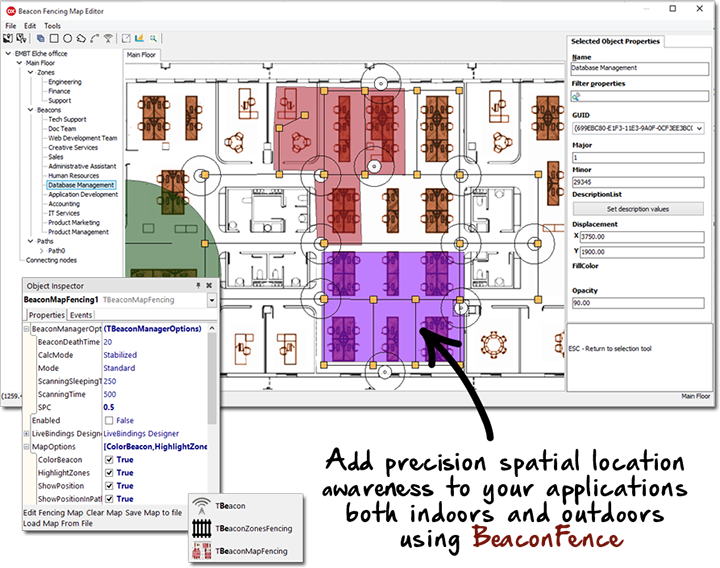 Konopka Signature VCL Controls
With a suite of 125 Windows UI controls and custom property editors designed to make your applications more intuitive and visually stunning, Delphi developers can modernize and simplify every Windows user experience. Konopka Signature VCL Controls deliver unsurpassed attention to detail, ease of use, and flexibility for both the end-user and the developer.

CodeSite
Gain deeper insight into code execution with a live viewer logging system that helps locate problems quickly while code is executing locally or remotely. With CodeSite, go beyond traditional breakpoint debugging to log application execution while the app continues to run, feed data from multiple apps into a single log, and visually analyze data in real time. 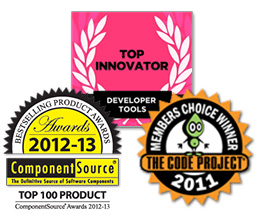 Get Started with Delphi 10 Seattle Today